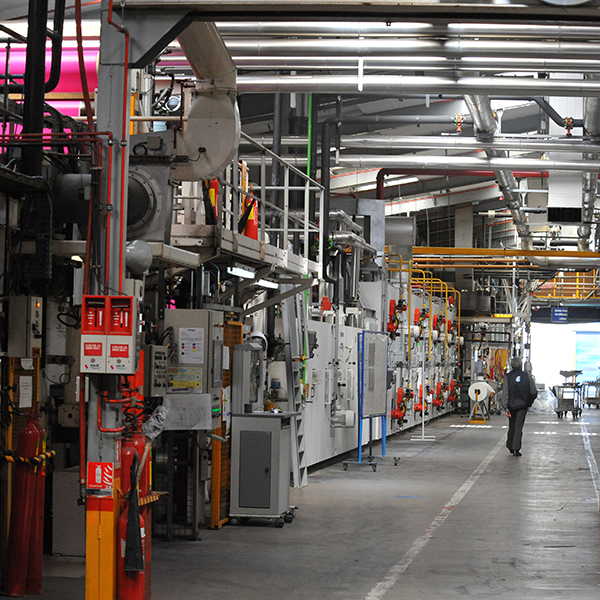 Committed to develop circular economy models in partnerships with customers and suppliers.

Optimization of water consumption, including through water closed loop circuits.

The industrial sector accounts for a significant portion of the world’s environmental impacts, including approximately half of global energy use.i Manufacturers can help manage their energy and water consumption and waste production, as well as associated costs and environmental impacts, by improving the efficiency of the facilities as well as of the production process.

Tarkett designs, manufactures, and sells vinyl, carpet, wood, laminate, sports, and other specialty flooring products for the residential and commercial markets in Europe, North and Latin America, the Commonwealth of Independent States, and Asia-Pacific. Tarkett has been deploying a sustainable development strategy transforming its business towards a purposeful and collaborative circular economy model, positively impacting people, planet, and profit. As part of this sustainable development strategy, Tarkett seeks to eco-design its products to optimize the use of resources at each stage of their life cycle in accordance with Cradle to Cradle®principles and to make a positive contribution to the environment and human well-being.

In the framework of its “closed loop circular design” approach, based on four pillars (good materials, resource stewardship, people friendly space, reuse), Tarkett works to optimize the use of resources during manufacturing operations. Tarkett monitors key performance areas relating to greenhouse gas (GHG) emissions, water use, and waste generation on a monthly basis through the operational excellence and cost-efficiency World Class Manufacturing (WCM) program deployed within the plants worldwide.

As part of its efforts to manage energy consumption and greenhouse gas emissions, Tarkett has taken a number of actions across its production facilities. These activities include a significant biomass project, through which the wood flooring production plants use sawdust as a raw material for generating their own energy.

Meanwhile, Tarkett recorded a 3 percent decrease in greenhouse gas emissions in absolute value from factories and administrative buildings in 2014, while overall greenhouse gas emissions increased by 6 percent per square meter of product. This slight relative increase is primarily due to the fact that when production volume decreases, there is not necessarily a proportional decrease in energy consumption, due to factors such as the fixed costs.

Tarkett is committed to managing its environmental impact through ongoing efficiency and innovation projects. In 2015 and beyond, Tarkett is implementing or actively considering a number of activities related to its energy use, including:

Tarkett has implemented a number of process improvements to reduce the consumption of potable water in its production activities. For example, in 2014:

In 2014, in absolute terms, Tarkett reduced its water consumption by 899,000 cubic meters, or 21%, when compared to 2013. In the same time period, Tarkett improved the efficiency of its water consumption 16% (liters of water/square meter of product), while it improved efficiency 13% (liters of water/square meter of product) between 2010 and 2014.

Currently 65 percent of Tarkett's factories are equipped with closed-loop water circuits or do not use water in their manufacturing process, as compared with 53 percent in 2013.

Tarkett is committed to managing its environmental impact through ongoing efficiency and innovation projects. In 2015 and beyond, Tarkett is implementing or actively considering a number of activities related to its water consumption, including:

In connection with its World Class Manufacturing program, Tarkett has identified and implemented operational efficiency and cost-reduction action plans to limit waste production and optimize the use of raw materials at production sites. Tarkett has also put in place systems to recover waste, defective products, and production scraps and reincorporate them into its manufacturing process, including scraps from post-installation and post-used flooring. For example:

Tarkett also decreased waste going to landfill from all of its factories by 2 percent, for a total of 14,283 tons in 2014 compared to 2013. Additionally, 13,500 metric tons of post-installation and post-consumer flooring were collected through recovery programs in 2014.

Tarkett is committed to managing its environmental impact through ongoing efficiency and innovation projects. In 2015 and beyond, Tarkett is implementing or actively considering a number of activities related to its waste generation, including:

Tarkett participated in the Green Portfolio Program, joining the effort in 2010. In addition to the above mentioned activities related to the Green Solutions Platform, Tarkett is committed to other aspects of sustainability in its strategy and operations. For more information on Tarkett's sustainability program, visit the company's website.

ii In 2015, KKR began utilizing performance data that Tarkett assesses using its own protocols. Therefore, past program results and baselines have been restated to reflect the company’s information.

iii In 2015, KKR began utilizing performance data that Tarkett assesses using its own protocols. Therefore, past program results and baselines have been restated to reflect the company’s information.

In 2015, KKR began utilizing performance data that Tarkett assesses using its own protocols. Therefore, past program results and baselines have been restated to reflect the company’s information.